Note :-   The vanBasco player is suitable for all versions of Windows including Windows 95/98/ME/NT 4/2000/XP   Windows 7, 8 and 10
Click on the download button to download the player. It is free, safe and fairly small. Ignore the optional email entry box.
For most users,  a little box will pop up on the screen, automatically starting the download.
Choose "Save this program to disk" and save it to your Music folder.  It will be saved as a file called vkaraoke.exe

KaraUkey is Ukulele Karaoke and Guitar Karaoke on your Computer. Here's how to try it on your Windows, iPad, MAC, Android, or Linux device.

1. Choose a FREE software Player suitable for your Windows PC from the vanBasco website here  click      vanBasco Player  free
(NOTE  It is best to Install the vanBasco player to a music folder NOT the default Program folder.)

​     OR as an alternative for Mac a trial version of Qmidi is available. click  Qmidi

2. Install the player on your machine. They are very small and use up very little resource on your computer.

3. Click on the song name to download a song to try on your player   Sweet Georgia Brown

That's it, you should now have KaraUkey playing on your Machine.

The backing tracks on this website are supplied under licence and royalties are paid to the copyright owners.

Note the  vanBasco Player is downloaded as a zip file. Most Windows based machines include an UnZip utility.  Click here for more info on Zip files and a free UnZip utility should you need it.

You can also go bigger for group KaraUkey sessions. How big you go will depend on the number of people there are likely to be.

Because KaraUkey has both video (synchronised lyrics and chords) and audio (multi track backing) you can go Bigger with either or both. With my own group I went through several of these steps. We now have regular KaraUkey strumfests and sing alongs.

Use the VGA socket on your computer to connect to the VGA input port of  an external TV. This allows you to go fairly big with large screen TV's . You can also connect to a projector and go even bigger. You could also use HDMI sockets if you prefer. VGA leads and HDMI leads of various lengths are available at electronics shops. Projectors range from smaller portables to large built in projectors at pubs and clubs. Even the smaller projectors can produce huge images. Note there are VGA expansion cables for iPads.
"I carry a VGA cable in my kit along with a portable projector (a table top unit like the one shown below right). Depending on the venue, I can plug into a big screen TV, or  an in house projector system if one exists , or use my own projector."  Henk

Going bigger with the audio. How big also depends on the size of the group.

To go bigger with the sound, you need to connect the audio output of your computer to an amplifier. For a smallish group this could just be a set of computer speakers like the ones shown here. The audio output on a laptop is the headphone jack. a suitable lead is needed to connect to the external sound. The speakers shown here come complete with a suitable headphone jack. So stepping the audio up to this size is relatively easy, and there are some very good PC speakers available.

If you would also want to include plug ins for microphone/s and Ukulele/s you can expand to a larger amplifier with more inputs.

You may already have a guitar amplifier that will suit the purpose, or a PA amplifier, or access to an in house audio system, in which case you really just need suitable connecting leads from your computer to an audio input jack.   Shown below are various leads and plugs. The stereo headphone jacks plug into your PC. Some amplifiers have RCA inputs others may have 625mm (1/4 inch) jacks in which case you can use the RCA to 1/4 inch adaptors. The stereo headphone jack (stereo has two black lines) separate into the two RCA plugs. The 1/4 inch adaptors are mono plugs (1 black line). The two adaptors can be plugged into the left and right channels of the amplifier.

"I use a Behringer system like the one shown below, because I like to sing and play." 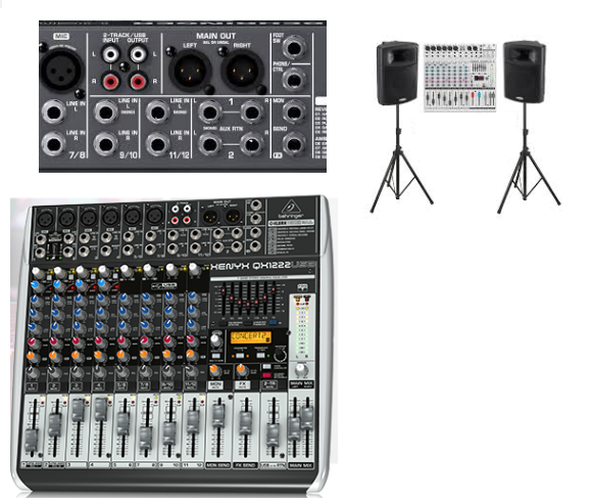 That's not to say it is the best there is, it just happens to be the one I use. It was relatively inexpensive and I have had no problems with it at all. The little blown up image at the top shows the 2 RCA input jacks where you can plug in the audio signal from your computer. As it happens this mixer also has a USB port so you can connect to it from a USB port on your computer as an alternative. My speakers are  B208D 200 watt active speakers. They are plenty big enough for what I do and are a bit smaller than most and therefore easier to carry around. They are active speakers because they have built in amplifiers. You can actually just plug a microphone or a Uke directly into the speakers for a little PA set up.

The system provides for microphones to be plugged in (using either the canon inputs or the 1/4 inch inputs) as well as 1/4 inch jacks for ukuleles and the sound coming from my computer either via the RCA inputs or the USB connection. 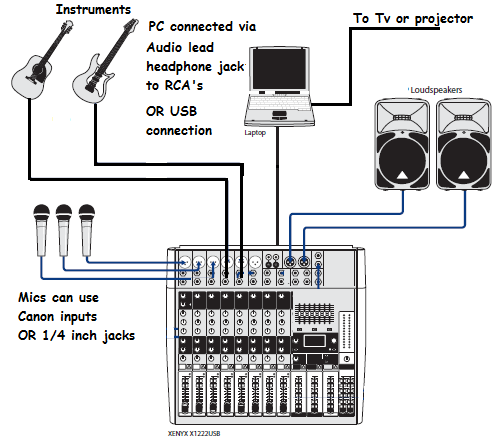